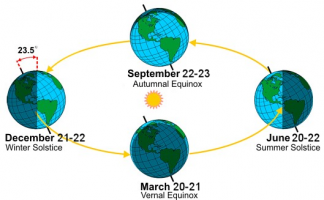 As I draft this Chair’s Report for the September, 2016 issue of TIRF Today, I am aware of the passage of time. For instance, it has been six years since Ryan Damerow and I produced the first issue of this monthly newsletter. I can hardly believe I’ve managed to produce 73 Chair’s Reports!

What exactly is an equinox? Using our word-attack skills, we can recognize that equinox represents equal, and Harry Potter fans will recognize nox as meaning night or darkness. This is the only time of the year when the northern and southern hemispheres experience equal (or roughly equal) hours of light and darkness.

The autumnal equinox, regardless of where you may be, is associated with harvest customs in many cultures. For example, the Mid-Autumn Festival in China takes place near the September equinox. It is traditionally a celebration of the fall harvest, and people eat mooncakes and gaze upon the moon. There is a Japanese tradition of visiting ancestors’ graves at this time of year. This Buddhist celebration is called Higan, “which means the ‘other shore.’” The term “refers to the spirits of the dead reaching Nirvana. It is a time to remember the dead by visiting, cleaning, and decorating their graves.”

The change of the seasons has been explained in many different cultures. For example, in Greek mythology, Persephone, the daughter of the Demeter (a harvest goddess), was allowed to spend six months of the year (starting with the spring equinox) on earth with her mother. But at the autumnal equinox, she had to return to the underworld and spend six months with her husband, Hades. At that point, Demeter became very sad and the earth became cold and barren again. For this reason, according to timeanddate.com, the fall equinox is “supposedly a good time to enact rituals for protections and security as well as reflect on successes or failures from previous months.”

In Pagan tradition, the fall Mabon celebration is based on the harvest and the need to prepare for winter. In Europe, the Christian church overlay some Pagan tradition with Christian symbolism. For instance “The Feast of Michael and All Angels” (also known as Michaelmas) occurs on September 29th, which is either on or quite near the autumnal equinox.

Some of the early indigenous people of Australia have been called the “world’s first astronomers,” because they had a very accurate way of predicting the spring and fall equinoxes nearly 10,000 years ago. Through the position of carefully placed stones, they were able to tell the exact position where the sun would set at the equinoxes.

Apparently Mayan astronomers also understood the timing of the equinoxes.  According to LEARN NC, at the ancient city of Chichén Itzá, during the equinoxes in both spring, “the great pyramid serves as a visual symbol of the day and night. On every equinox, the sun of the late afternoon creates the illusion of a snake creeping slowly down the northern staircase.”

Thinking about the equinoxes, and the shifting hours of relative light and darkness, reminds me of the need for balance and flexibility in our lives. We need to prepare for winter as well as celebrate the harvest. It may seem strange to be thinking about winter when the evening temperature here is 86 degrees F (30 degrees C), and yet, the change is imminent.

In our Foundation, as in our personal lives, while we are grateful for summer’s bounty, we must be mindful of potential dark days ahead. I hope it is not stretching the analogy too much to say that the fiscal responsibility of the TIRF Trustees includes being prepared for lean times. At our recent Board meeting, as we discussed the draft of the 2017 budget, it became clear that we cannot sustain our present level of programmatic activity if we don’t increase TIRF’s revenues. In addition, best practices in non-profit management advise us that organization should have a full year of operating capital on reserve, in case of financial setbacks. At the present time, TIRF does not have such a reserve fund.

In contrast, throughout its entire existence, TIRF has received gifts from 231 individuals and 25 companies. However, during the course of one individual year, we receive support from far fewer people and organizations. So far this year, we have received gifts from 38 individuals and five companies. Our annual budgets are typically around $100,000. In other words, we are operating on a very tight budget in terms of all the initiatives we have underway, as well as the minimal operating expenses we incur.

In returning to the analogy of the equinox above, these are both light and dark times for TIRF. The light is represented through the Foundation’s growing programs and reach; the dark is represented through our continued struggles to raise funds in order to have one year of operating capital in our bank account.

It has dawned upon me that TIRF is hanging in the balance of light and dark, and without your help we may slip into the darkness for good. We must creep out of the shadows and feel the warmth of sun again. In order to do so, we need your help. You could be the 39th individual to make a donation to TIRF this year!

TIRF Board of Trustees Convenes for its Fall Meeting

Chair’s Report, By Kathi Bailey – The Search for Treats is Tricky