Chair’s Report, By Kathi Bailey – A Drop in the Bucket 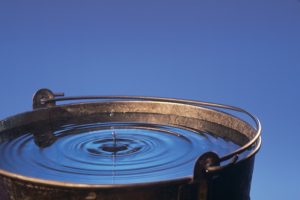 I am sure that most of our readers have explained idioms to language learners. I was thinking of an idiomatic expression the other day (perhaps because we’ve finally gotten some rain in California): a drop in the bucket.

YourDictionary.com explains “a drop in the bucket” this way: “An effort or action having very little overall influence, especially as compared to a huge problem.”

The example given on that website is very appropriate for TIRF: “A $100 donation from an individual is generous, but it is a drop in the bucket compared to the $100,000 fundraising goal.”

I beg to differ. In fact, I vehemently disagree. For TIRF, a hundred-dollar gift is a great blessing.

In fact, there’s a catchy little tune I like, which was written by Mitch Barrett and Carla Gover. It is called “A Drop in the Bucket.” The lyrics point out that a bucket fills a pond, the pond adds to a river, and the river joins the sea. The song concludes that “what becomes the mighty ocean started with a drop.”

There are three examples in the verses, illustrating how one person’s actions can change the world: Rosa Parks, Gandhi, and Mother Teresa.

What I love about this song is that the lyrics have turned the idiom on its head: Instead of being a meaningless gesture, a small contribution can be the beginning of something very big. Yes, of course, I understand the need for massive systemic change to solve even a few of the world’s biggest problems. But I still believe that the actions of individuals can trigger important and inspirational changes.

Think about other recent examples: A seventeen-year-old Pakistani, Malala Yousafzai, was the co-winner of the 2017 Nobel Peace Prize for her efforts to promote girls’ education. Paulo Freire started his career as a grammar teacher when he was a high school student.

Even closer to home, professionally speaking, because of her experience tutoring Syrian refugees in Turkey in 2013, Bailey Ulbricht started Paper Airplanes, the organization described in this issue of TIRF Today. She and her colleagues established an international network that pairs tutors with language learners whose lives and education have been disrupted by conflict.

I like to think that TIRF is such a drop – a grassroots idea that started twenty years ago. To date, TIRF has awarded nearly US $1 million to fund 156 research projects involving 183 researchers from nearly 30 countries around the world. Who knows what positive and important changes those individuals will initiate in their own professional contexts?

With my very best wishes for the holiday season and the New Year,