Chair’s Report, By Kathi Bailey – The Search for Treats is Tricky 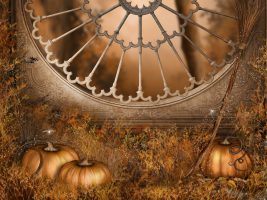 At the end of October, people in several countries will celebrate Hallowe’en, or All Hallows, as it is called in some places. Children (and some adults) dress up in costumes for “trick-or-treating” – going door-to-door, asking for candy. It has been many years since I wore a Hallowe’en costume, though I will admit to enjoying dressing up some years ago, sometimes as a mysterious fortune-teller and at other times as a very scary wicked witch.

I sometimes think of wearing a costume as being in disguise. What is the difference? I suppose the idea of using a disguise carries with it the intent to hide who we are, or even deceive people as to our identity. In contrast, wearing a costume has more of a playful masquerade feeling about it, whereas going in disguise implies secrecy and even subterfuge.

There are different explanations as to why people wear costumes for this event. Some traditions say that the practice of going from door to door stems from early Celtic beliefs. By impersonating the souls of the dead, it seems that people protected themselves from contact with the departed.

In fact, Rose Eveleth, writing on the Smithsonian website, says, “The Celts believed that, as we moved from one year to the next, the dead and the living would overlap, and demons would roam the earth again. So dressing up as demons was a defense mechanism. If you encountered a real demon roaming the Earth, they would think you were one of them.”

Part of the tradition holds that people who gave food or money to these costumed visitors would receive blessings, because those who came begging did so on behalf of the dead, serving as their proxies in the living world. If a household did not give, however, bad luck would follow – sometimes at the doing of the visitors themselves. The gleeful exclamation, “Trick or treat!” is really a veiled threat: It tells the residents to give the costumed visitors some kind of treat, or they will face some sort of trick. In fact, I believe that in modern times the trick-or-treaters’ costumes are sometimes used to veil the identities of mischievous teen-agers who smear car windows with soap, or wrap trees and postal boxes with toilet paper.

Now I suppose you are wondering how I am going to tie the theme of Hallowe’en costume to TIRF. One approach would be to confess that I sometimes feel as if I am masquerading as a fundraiser, or at least desperately trying to be one without having had any formal training for the role. I’ve read numerous articles and newsletters about philanthropy and I have attended several webinars on the topic, but that doesn’t mean I’m qualified to generate large-scale gifts for the Foundation. 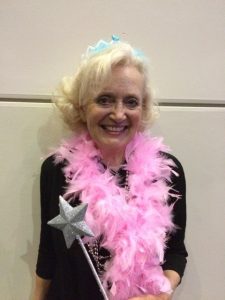 Another strategy would be to take the slightly sinister approach of implicit mischief if donations are not forthcoming. I can imagine Ryan Damerow (TIRF’s Chief Operating Officer, pictured left) dressed up as a 1920s gangster, rounding up all of the prospective donors and telling them, “Wise guys, eh? You better donate to TIRF, see?” In contrast, TIRF Trustee MaryAnn Christison (pictured right) could reprise her role as Glinda, the good witch, from the recent TESOL Convention version of the Wizard of Oz. She could go door to door, encouraging potential donors with her beatific smile, and telling them “There’s no foundation like TIRF!”

If you have an interest in supporting a wonderful cause directly related to the people served by our profession, won’t you please help us? By making a financial contribution to TIRF you can help to ensure the continued work of the Foundation. And our promise to you is that we will deliver only treats – not tricks – when using your gift to support our mission.